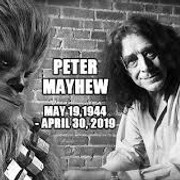 Chewbacca Actor Peter Mayhew From ‘Star Wars’ Dies at 74
“Star Wars” actor Peter Mayhew, who played Chewbacca in the original trilogy, died on Tuesday, his family announced on his Twitter. He was 74.

He died at his North Texas home surrounded by his family, read the Twitter statement.

The family of Peter Mayhew, with deep love and sadness, regrets to share the news that Peter has passed away. He left us the evening of April 30, 2019 with his family by his side in his North Texas home.

Though he spoke entirely in growls, snarls, and the occasional roar, Chewbacca’s unwavering loyalty to Han Solo made him one of the most beloved characters in the franchise. Much more than just the hairy co-pilot of the Millennium Falcon, Chewie’s dependability and trustworthiness helped the iconic Wookiee function as the series’ ultimate “wing man.”

He was discovered by producer Charles H. Schneer while working as a hospital attendant in London, and cast in Ray Harryhausen’s “Sinbad and the Eye of the Tiger.” The next year, he was cast as Chewbacca, the 200-year-old Wookiee.

Mayhew went on to appear in “The Empire Strikes Back,” “Return of the Jedi,” “Revenge of the Sith,” “The Force Awakens” and “The Star Wars Holiday Special.” He was active on the “Star Wars” convention circuit and wrote two books, “Growing Up Giant” and “My Favorite Giant.”

His height was not due to gigantism, but he measured 7 feet 3 inches. George Lucas originally had his eye on bodybuilder David Prowse to play Chewbacca, but Prowse decided to play Darth Vader instead and Lucas went with the even-taller Mayhew.

Mayhew was asked by Australia’s BMag why Chewbacca didn’t get a medal at the end of the first “Star Wars” along with Solo and Skywalker. “I think it was one of two reasons,” he said. “One, they didn’t have enough money to buy me a medal. Or two, Carrie couldn’t reach my neck, and it was probably too expensive to build a little step so that I could step down or she could step up and give me the medal.”

There will be a memorial service for friends and family on June 29, with a memorial for fans in Los Angeles in early December at EmpireCon. He is survived by his wife, Angie, and three children.