A few new bits have been turning up down here over the last few weeks ..

Flicking through the junk mail from the letterbox last night I found some new Star Wars USB Flash Drives (8GB) being advertised. These are proper little figurines rather than the painted Mimobot USB flash drives. As usual, they're over-priced (even at the "introductory sale price") for the storage capacity.

Cool. If you could post a photo or link to those flash drives, that would be awesome. Those movie heroes 2-packs were Target exclusives here in the US. There are only two sets. Mostly reissues with Anakin being a repaint.

I'm not sure if Farmers here has some sort of deal with Target or Hasbro NZ, but they seem to have had some of the Target Exclusive products (without the Target sticker) for a while. Those Movie Heroes 2-packs are currently priced at NZ$15 (US$12.44) and the regular various sub-brands of 3 3/4" figures at Farmers are currently "two for NZ$30" (US$24.88) as they try to get rid of all the old stock.

The Warehouse (similar to Kmart) advert doesn't say what make the USB flash drives are and they're only shown loose, but they look like these ones, which I think are Funko brand at sold by various gadget webstores (they do look very similar to the Funko Bobblehead figures): 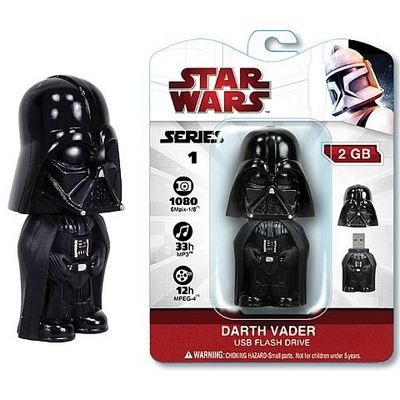 The junk mail catalogue only shows R2-D2, Darth Vader, Yoda, and a Stormtrooper ... not Boba Fett as in the web-"borrowed" image above, but there may be more in-store. I'm planning to pop in to a branch tomorrow (Friday) to have a look at them, but I probably won't buy any since I have three USB flash drives already and no real use for any more. They're advertised at an "introductory offer" price of NZ$19.99 (US$16.58), which is expensive for 8GB capacity, and will supposedly be NZ$29.99 (US$24.87) after the catalogue's 18 December end date.

Another junk mail catalogue in the letterbox today is advertising the similar EMTEC Looney Tunes USB Flash Drives at 30% off.

Now I know why there was no brand name on the advertising of those USB flash drives ... because there is none on the packaging either. It's different packaging to the one in the pctire above. The front of the card has the Darth Maul header, but the rest of it is plain white with no printing. The back of the card has the usual USB details and the official StarWars.com logo / tag line.

There is only the four: R2-D2, Yoda, Darth Vader, and a Stormtrooper. As usual (except for Angry Birds and Fighter Pods Series 1) they seem to be in low numbers - the branch I visited didn't have any on display, just a few in the cabinet behind the counter, but I went next door to the sister company Warehouse Stationery and they also had them.

If you've got a better computer / web browser than mine, then you could try doing a search on The Warehouse website ... I tried, but it just keeps crashing the web browser.

Hmm....I helped Todd get some of those off eBay from a Chinese seller about a month or so ago. Relatively cheap ($5-$8 each as I recall) and came in plastic bags...no packaging. That R2 one is pretty awesome looking...the others didn't impress me. I guess I'm picky about my super-deformed characterizations.

Definitely a nice change of pace from the mimobots.

In this week's junk emails there was one which had these Star Wars USB flash drives by Tribe (note: incredibly slow website) which look quite nice in the images, but again over-priced. They were meant to be released on 30 November, but I don't know if they were.

Tribe Star Wars USB Flash Drives
Want to keep information at the ready in style? Imagine putting R2D2 or Yoda to work as an 8 GB USB flash drive? Small enough to keep on a keychain, these new flash drives from Tribe are coming to stores November 30th. The going price for these drives is expected to fall around $30 US. For the premium price, Tribe will throw in 1 GB of free online storage just for buying one. May the flash be with you.
Click to expand...

Some Star Wars New Zealand members are reporting new batches of some of the older 3 3/4" figures appearing on shelves again down here (e.g. the "lost wave"). There's also some Battle Packs on sale at half-price (NZ$30 / US$25), but the numbers and types vary greatly from branch to branch.

There are also some new boxes of cookies (Angry Birds, Smurfs, and something else) that come with free stickers / decals being advertised which I think are American-imports, but no Star Wars ones.

As well as the ugly new 12" Hasbro figures and the new 3 3/4" scale vehicle packs mentioned in the 12" Hasbro Figures topic, this diecast metal Stormtrooper figure from Japan was advertised in one of last week's junk emails from the New Zealand webstore MightyApe.co.nz.

It looks quite nice in the photos, but is quite expensive at NZ$149.99 (roughly US$126.73, but they don't ship it outside New Zealand) ... and as often with Japanese figures, the head is a bit over-sized.

This mostly diecast (includes some PVC parts, too) articulated Stormtrooper is ready to take on all comers!

Stands 14cm (5.5") tall and features 20 points of articulation. Includes a blaster carbine and 4 extra hands for a variety of posing possibilities.

Please note: This item ships to us direct from Japan – packaging, promotional materials and booklets may be in Japanese only.

It seems to be the only Star Wars figure in the series so far (and the only one MightyApe.co.nz have listed), but the Japanese Hero Cross company does make other Hybrid Metal Figuration figures:

In today's travels I found a new Top Trumps Star Wars pack. It's called Rise of the Bounty Hunters, and from the cover image it is based on the Clone Wars cartoon series. I bought one using a 50% off coupon in the four-day sale they're having this weekend.

Neat. Not sure that I've seen that one around here. I haven't opened up the pack yet - it could just be a re-pack of the previous Clone Wars pack.

I've also seen a Top Trumps Doctor Who set in a ball container similar to the Star Wars one posted further above.

Not much down here in New Zealand recently. The 3 3/4" and 6" Black Series figures arrived in very limited numbers (the second wave of 6" figures arrived in shops about 1 1/2 - 2 weeks ago), and the 31" Darth Vader appeared also in limted numbers, plus the usual Hallmark Xmas ornaments.

The annual Hasbro NZ warehouse sale last weekend reportedly had some good prices on a few old vehicles and figures. Last week a Jakks Clone Wars TV game device (flight games) appeared in branches of an electronics store chain, and the same stores had a sale on Thursday with Star Wars USB flash drives at a lower price (but still over-priced for the low storage sizes).

A month or so ago the Kinder Surprise Star Wars Twisthead figures arrived in supermarkets. These rather weird looking little figures (about 1 1/2 inches high) come random-packed inside Kinder Surprise chocolate eggs. I managed to collect a whole set of 10, but also ended up with the usual pile of double-ups. Surprisingly, even a couple of the Star Wars New Zealand members collected these even though they all completely ignored the Mighty Beanz and Fighter Pods.

They're called "Twistheads" because of the game you can play using them where the head flips open, then you can join two figures together head-to-head and twist the bodies. That causes a small number wheel inside each head to rotate, and when you separate the figures the person with the highest visible number inside "wins".

A few of the latest 6" Black Series figures turned up here in New Zealand recently, as usual some are easier to find than others.

Also found here recently were some Star Wars-themed mini-skateboards / finger-skateboards. Apparently there are seven different designs in the set, but I haven't seen them yet (I've only found SImpsons and other designs from the same company).
Photo Link (1.1MB)

I found some of the Star Wars-themed Tech Deck mini-skateboards yesterday at two different store chains - not that impressive and certainly over-priced for a small sliver of plastic with a set of plastic wheels attached.

A new miniatures game has turned up in some toys shops here in New Zealand: Star Wars Command.

There are a few packs of various sizes on the shelves (and more advertised on the back of the boxes) each containing some small unpainted plastic figures and vehicles ...

We've got the Tech Decks and the army men here in the US as well.....although they are certainly more affordable here. Skateboards run $3 each, and the army men start at $5 and go up from there. I think both are neat, but certainly not worth paying a premium for.

In today's travels I saw a few more varieties of the Star Wars Command sets (including a Millennium Falcon).

I also found some Clone Wars Play Doh sets. They come with a playmat, an Anakin Skywalker mold, a Battledroid trio mold, and a lightsaber masher to "defeat the enemies" by squishing them.

Some of the new(ish) Lego Star Wars sets are also on sale ... although that means they are just slightly more reasonably priced rather than actually cheap.

Limited numbers of the huge Hero Series X-wing Fighter has turned up down here at the Farmers chain of department stores, priced at US$82.48. It would probably look okay hanging from the ceiling, but at close range it looks far too plasticky for my liking. (Like the plasticky huge Darth Vader, these X-wings will also end up dropped to slightly lower "clearance" prices.)

Also, since it's September, that means shops putting Christmas stock on the shelves

and The Warehouse chain (similar to Kmart / Walmart) is advertising a Star Wars Advent / Christmas Countdown Calendar (US$4.12) as part of a "Buy 1, Get 1 Half Price" licensed advent calendar promotion.