Disney are now rushing ahead with a new animated series (due in 2014) for their own channels.

The series will mine material in the 19 years that follow Episode III: Revenge of the Sith and precedes the Episode IV: A New Hope. In other words, using the life of the Skywalker twins as a measure, the series will be active in the story years that come after their separation as newborns and before their (unwitting) reunion on the prison level of the Death Star.

No word on whether the show will feature Darth Vader (who would be in the Empire's power consolidation years and earning his reputation) or even pull in a character like Han Solo, the smuggler and cynic who becomes an unlikely freedom fighter when he opts to stand with his friends against cosmic odds. The title of the show is vaguely phrased in a way that any rebel - even a Boba Fett or Ahsoka Tano.

The series has three executive producers: Dave Filoni, the point man on The Clone Wars animated series that launched in 2008; screenwriter and producer Simon Kinberg, whose has a flair for tonal rewiring and energizing familiar brands with new edge (e.g.: X-Men: First Class, Sherlock Holmes); and Greg Weisman, whose credits include well-regarded work on Young Justice and The Spectacular Spider-Man.

A press release that was being readied Monday morning included a quote from Kathy Kennedy, the hand-picked successor of George Lucas as Lucasfilm president as well as an elite producer (Jurassic Park, Schindler's List) since the 1980s.

"I couldn't be more excited to explore new corners of the Star Wars universe," Kennedy stated in the release. "I think Star Wars Rebels will capture the look, feel and fun that both kids and their parents love about Star Wars."

Kennedy, who has brought a new vigor and decisiveness to Lucasfilm in-house culture that (a bit like Obi Wan Kenobi out in the lonely desert) seemed to forget some its fiery rebel heritage as the dust of passing seasons gathered.

Kennedy shocked some observers when she jettisoned a well-underway Lucasfilm initiative to re-release the prequel trilogy in 3D. The decision was not cheap but allowed her to turn all engines toward the new emphasis, an era of stories and characters that will be most familiar to the fan generation that sat down in the dark with in the Jedi summers of 1977-1983. The centerpiece of the new focus is the third trilogy, with a first installment expected in 2015 or 2016 and directed by J.J. Abrams.

The new venture will put considerable pressure on the creative team. The animation process is not a fast one although it it was not clear Monday how long Filoni and his colleagues have been working on the new show. For the fans who see Kennedy's priorities as a new hope for the Jedi universe as entertainment, the news of Star Wars Rebels might bring to mind an exchange from 1977 space epic with a now-relevant pun: The Rebellion could really use a good pilot.

Staff member
The only reason to cancel the Clone Wars cartoon was because they didn't have enough resources to dedicate to both shows or they felt interest in Star Wars isn't high enough to warrant two shows. It doesn't seem like either of those things are terribly likely, but who knows. Perhaps there's something else that made it untenable to move the show from Cartoon Network to Disney.

Having said that, the time frame for the new show *should*, in theory, be considerably more interesting (at least to me).

The reported reason for cancelling The Clone Wars and shutting down LucasArts was because they wanted to concentrate on the movies ... which now appears to have bene just a load of PR-spin garbage, as usual. The real reason is obviously that thye didn't want to supply a competitior channel with content (even though Disney would be making money with it) - presumably they felt it wasn't a good fit with Disney channel content, so maybe the new animated show will be more Disney / kiddy-friendly.

I don't think we even get Disney XD here in New Zealand ... I know Sky TV does have the Disney and Disney Jnr channels.

I'm still a couple seasons behind on Clones Wars....but it was definitely a little more adult themed. Not that kids can't relate to serious topics and battle, nor does a cartoon need to be dumbed down for kids to enjoy it.

Overall, enjoyed the run (that I've seen), and look forward to more"classic" era tales as well.

I've got all of The Clone Wars DVDs so far, but I haven't actually seen very many episodes. I do like this version more than the previous Samurai Jack style show though.

A new still image has been released by LucasFilm.


Hasbro also recently released an image of the 3 3/4" figure for this new bad guy called The Inquisitor. Figure looks cool. Latest commentary is that the cartoon preview photo has a different lightsaber. One that is a little more practical. This one is shaped like the Grievous saber toy, which is great for spinning, but otherwise useless in combat.

Another new character has been revealed ... and astromech named "Chopper". This is from IGN.com ...

Last week, producer Simon Kinberg talked more in-depth about Disney and Lucasfilm Animation's upcoming Star Wars Rebels. Now, today, showrunner Dave Filoni had a few more things to say about the animated series and how it compares to his work on Star Wars: The Clone Wars.

"We will see many things that are famous to Star Wars, but have not appeared on screen in a while," Filoni told MoviePilot.de (via Coming Soon) in an interview. "Star Destroyers, TIE Fighters, and Stormtroopers -- basically the Empire is back and that is a big change, since, for many years, we have only seen the Republic in action. The tone of the series is also different. The Clone Wars got very dark as we headed towards the end of the war and the downfall of the Jedi. Star Wars Rebels brings back the banter and faster pace that the original films were famous for."

Filoni also said that most of Rebels' stories will take place on a new Outer Rim planet called Lothal. "The audience typically thinks of Tatooine as the place where Luke Skywalker grew up, when the Outer Rim is mentioned," he continued. "We are on a more civilized planet, and one that profited from the Empire's existence in the beginning. Most of the stories take place on the planet Lothal, which is a grass planet with large monolithic stones on the surface. The look comes from some Ralph McQuarrie concept paintings that were done for the original Star Wars films. We tried to make Lothal look and feel like a planet that would have been in the original film trilogy. It's alien, but you feel like it's someplace that you could visit on Earth geographically. Hoth, Tatooine, and Endor are all like this, so we think it fits in well."

Additionally, Filoni revealed a new character for the show, a grumpy astromech droid named Chopper. You can check out the images below, as well as a brief featurette, found here. 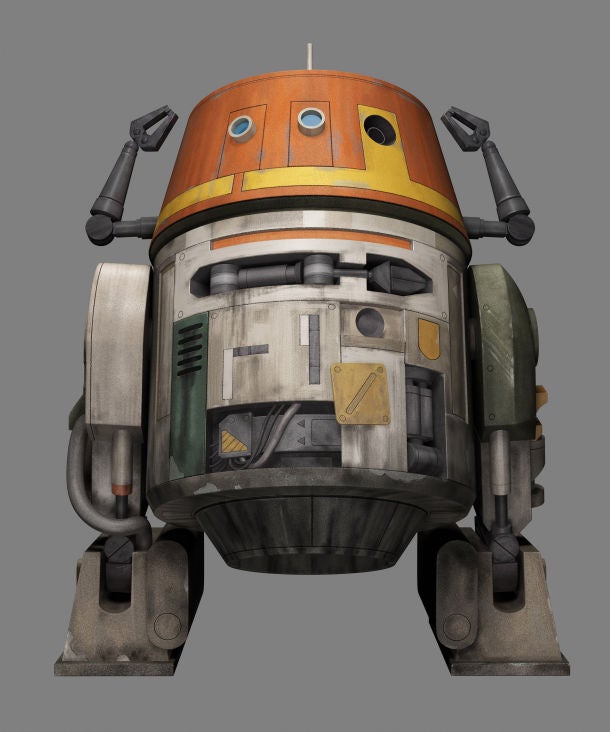 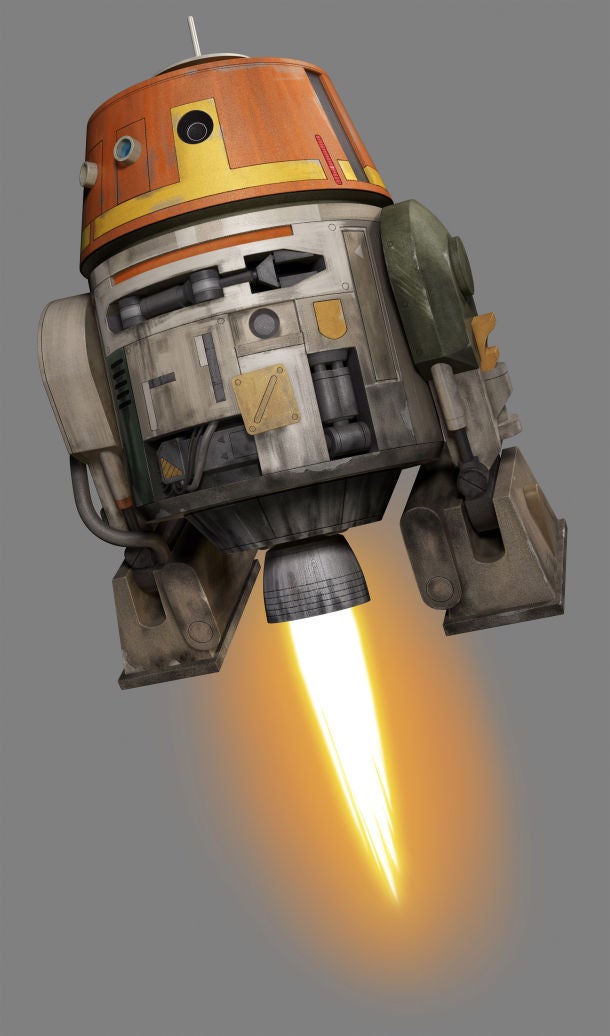 "Aren't you a little short for an astromech?"

ComingSoon.net (among other places) has images of six new Empire propaganda posters ... for a show supposedly based on the Rebels, they're certainly putting out a lot of Imperial imagery.

Apparently these are teaser clips on YouTube for Star Wars Rebels ...

Disney / Lucasfilm has released a Teaser Trailer. A full trailer is due for release on Star Wars Day (4 May).

The full trailer is out:

Starring a small band of heroes -- Sabine, Kanan, Hera, Ezra, Zeb, and Chopper -- Star Wars Rebels is set in a time where the Empire rules through fear and shrouds the galaxy in darkness. This trailer offers many new glimpses at sequences from the show, including the starship Ghost chased by TIE Fighters; young Ezra watching as a Star Destroyer looms overhead; Stormtroopers marching; a zero-g fight between our heroes and Imperials; and Kanan, a secret Jedi, assembling his lightsaber and preparing for battle. It ends, however, with an Imperial officer reporting to the Inquisitor -- the Empire's Jedi hunter, seen and heard here for the first time.

Star Wars Rebels takes place between Star Wars: Episode III and IV as the Empire tightens its grip on the galaxy and a rebellion begins to form. The series, executive produced by Dave Filoni, Simon Kinberg, and Greg Weisman, is scheduled to premiere in fall 2014 as a one-hour special telecast on Disney Channel and will be followed by a series on Disney XD.
Click to expand...

Staff member
This is probably a bit of a tangent. There's a difference between making a show that's appropriate for children and a show that's dumbed-down "for" children. I'm not saying the show will be bad, but for whatever reason, that's all I could think about while watching that trailer.

A clip showing the first seven minutes of the Star Wars Rebels animated series is on YouTube ...

Star Wars Rebels (YouTube)
In this special extended preview of Star Wars Rebels, the Empire arrives on Lothal -- bringing tyranny with them. Imperials and stormtroopers establish an intimidating presence on the planet, enforcing strict new laws for trade and arresting citizens for expressing dissent of any kind. A young boy named Ezra, however, discovers that a mysterious group is attempting to steal cargo from the Empire. Intrigued, he tries to take it for himself ... and ends up on the run from both Imperials and this small band of rebels.

Star Wars Rebels, set between Episodes III and IV of the Star Wars saga, will premiere in October 2014 with a one-hour special telecast on Disney Channel, and will be followed by a series on Disney XD channels around the world.
Click to expand...

Star Wars Rebels 'Not What You Think' Short Online
Lucasfilm and Disney XD have released a new short from Star Wars Rebels which shows Ezra finding a downed TIE fighter on the plains of Lothal. The young rebel opens the ship's hatch -- pretending to help the ungrateful Imperial pilot -- and leaves with a few souvenirs.


Star Wars Rebels continues the epic tradition of the legendary Star Wars saga with all-new exciting, action-packed adventures. It is a dark time in the galaxy, as the evil Galactic Empire tightens its grip of power from world to world. As the series begins, Imperial forces have occupied a remote planet, ruling with an iron fist and ruining the lives of its people. The clever and motley crew of the starship Ghost is amongst a select few who are brave enough to stand against the Empire. Together, this ragtag group will face threatening new villains, encounter colorful adversaries, embark on thrilling adventures and become heroes with the power to ignite a rebellion.

I watched 'Spark of the Rebellion' on the weekend. I absolutely loved it. The look and camera angles, the sounds and music, the feel and of course the characters all reminded me of the OT and being that 7 year old boy again. 2 weeks feels like lifetime away for a new episode.

So far I've just seen one of the teaser shorts, but it was awesome. Still need to finish up Clone Wars....almost done with it.