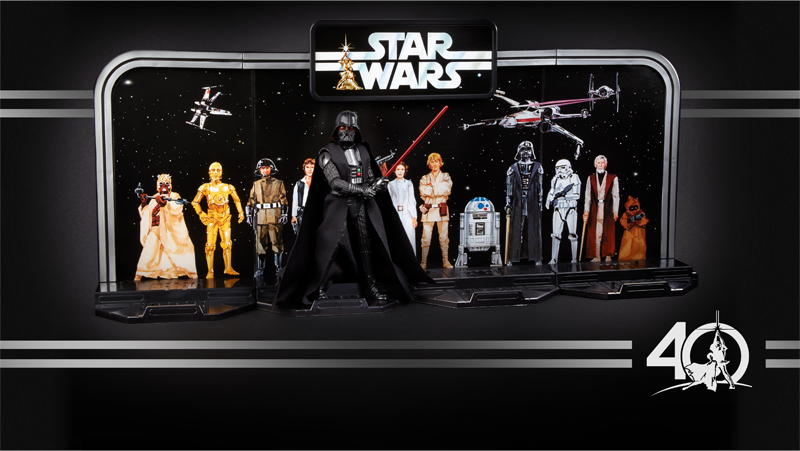 The very first Star Wars movie turns 40 in 2017—as are, practically, the toys that have long been intertwined with the franchise. To celebrate 40 years in the galaxy far, far away, Hasbro are breaking out the weaponized nostalgia with an homage to the classic Kenner era of Star Wars toys.

Unveiled at New York Toy Fair this weekend, a new range of 6" Black Series action figures are being released in packaging inspired by the original Kenner figures releases for A New Hope. Most of the figures have already been released in the Black Series line, so the real appeal for fans here is the very lovely old-school packaging.

The first wave, due out this spring for $20 each, will include repackages of Luke Skywalker, Han Solo, Princess Leia, Obi-Wan Kenobi, and R2-D2 in their classic cases—and they’ll be joined later in the year by Chewbacca, C-3PO, the “Death Squad Commander” (the name Kenner originally gave to its Death Star trooper toys), a Tusken Raider, a Jawa, Darth Vader, and a Stormtrooper. Those characters should be familiar to anyone who knows their Star Wars toy history: they are the first 12 characters Kenner ever released in the very first line of 3.75" Star Wars toys.

On top of that, Hasbro will be offering a special version of Darth Vader for $40, which is pretty much the ultimate homage: A recreation of the infamous Kenner Early Bird Certificate set, the empty cardboard box Kenner sold in Christmas 1977 to meet the furious demand for Star Warstoys after the movie’s surprise success. The original Early Bird certificate granted purchasers a voucher for figures of Luke, Leia, R2, and Chewie when they released in early 1978, and had a special cardboard display set to display the first 12 figures that would come out.

Hasbro’s new one isn’t quite an empty box—in includes a version of the Darth Vader figure bundled in—but it’s the same style of display, including both sides of backing from the original (one featured illustrations of the first 12 figures, the other a dogfight between X-Wings and TIE Fighters over the Death Star). But it’s a very cute move, recreating the whole set right down to the packaging—and a lovely way to display the new figures if you get all 12.


If your nostalgia-induced mania doesn’t stop there though, there’ll be at least another two 6" figures in the classic packaging: The first, Luke in his X-Wing pilot gear, will be exclusive to this year’s Star Wars Celebration event in Orlando. The second, the trusty exploding droid R5-D4, will be more widely available at Gamestop retail locations. Between this and the Last Jedi toys, there’s going to be a lot of Star Wars goodness this year.​
Click to expand...